Well, it’s the start of 2020 and things were going as planned in the Pyrotex camp, stock was coming in left, right and centre from all of our suppliers for what was going to be our busiest year to date! a big storage move was also well under way from our old 4 x 40ft containers to a huge underground bunker with ample space that was soon filling up and nicely organised.

Stock was also being prepared every week for the upcoming November season with cue stickers and waterproofed (just in case) and marked up for each show and palletised in readiness for when it was due to leave the mag for ease. 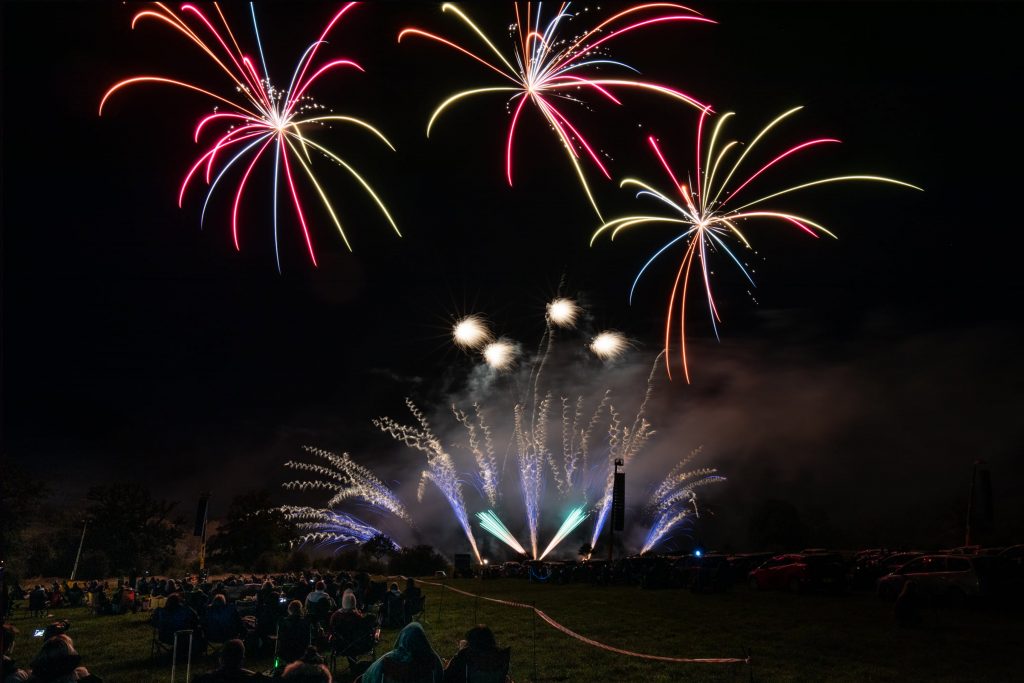 "COVID-19 reared its head and put a halt to proceedings." 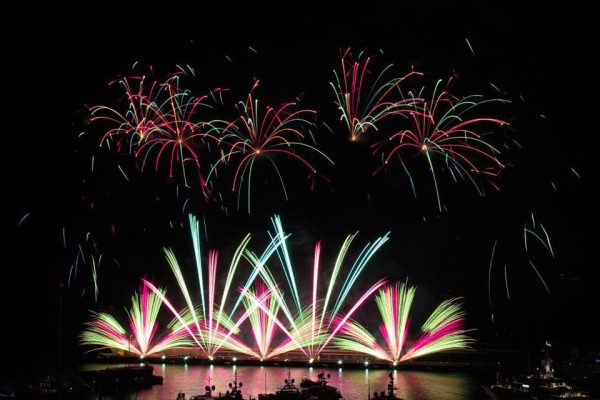 Competition invites were also coming in thick and fast as were the endless wedding displays, so the office work was also as busy as ever, then in March disaster struck! COVID-19 reared its head and put a halt to proceedings.

The weeks and months following the outbreak were definitely a struggle for us, which was echoed across the industry, truly crippling in some cases. However, as things progressed during the pandemic there was a glimmer of hope that we may get to see and fire some pyro and that came in the shape of the new and revolutionary Drive-In Fireworks event that Mat and the MLE team were pushing through and making massive leaps with.

"The green light was given for us to be a part of the MLE Firework Championships at Eastnor Castle!"

The music was chosen and signed off earlier in the year, but the design hadn’t been started, so after the green light, Scott hit the design phase of the competition. Being capped at 4” shells gave him more scope in the tight NEC restrictions to use more product throughout the show. After a month or so of hard work during the furlough stage of COVID the design was finalised and the NEC was submitted to the MLE team for sign off.

Once the NEC was signed off by the MLE team the prep work began. Just over 1000 cues over 42 modules consisting of roughly 250 shells, 700 single shots and 50 cakes and slices all for the 10-minute musical display. This show was our most technical display we have done for the MLE event so the prep work was paramount.  During the single shot preparation, we soon realised that we were running out of fins (due to most of them being used on a big international display that had been prepped pre COVID) so we soon had to beg steal and borrow some from our good friend Komodo Fireworks, once the prep work of the product was finished our attention turned to the firing system. Again, we realised that we were short of FireOne Modules so a few phone calls were made and Dynamite fireworks came to the rescue. The final things to do as normal was to sort hire vans and logistics. We were ready! 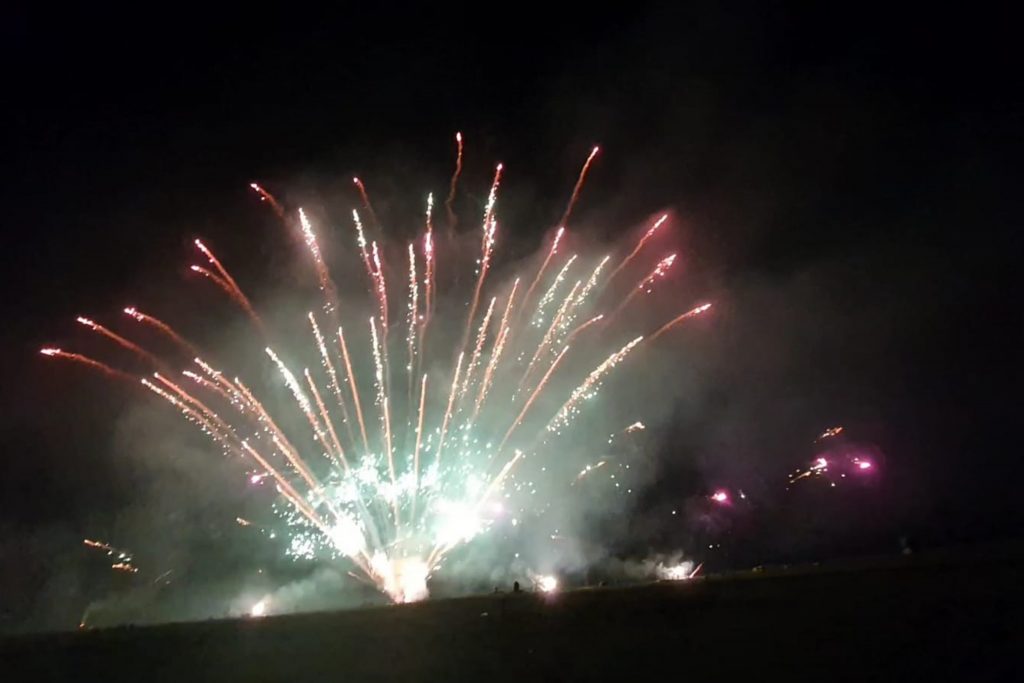 "The weather was beautiful and the mood was high so the rig was a breeze." 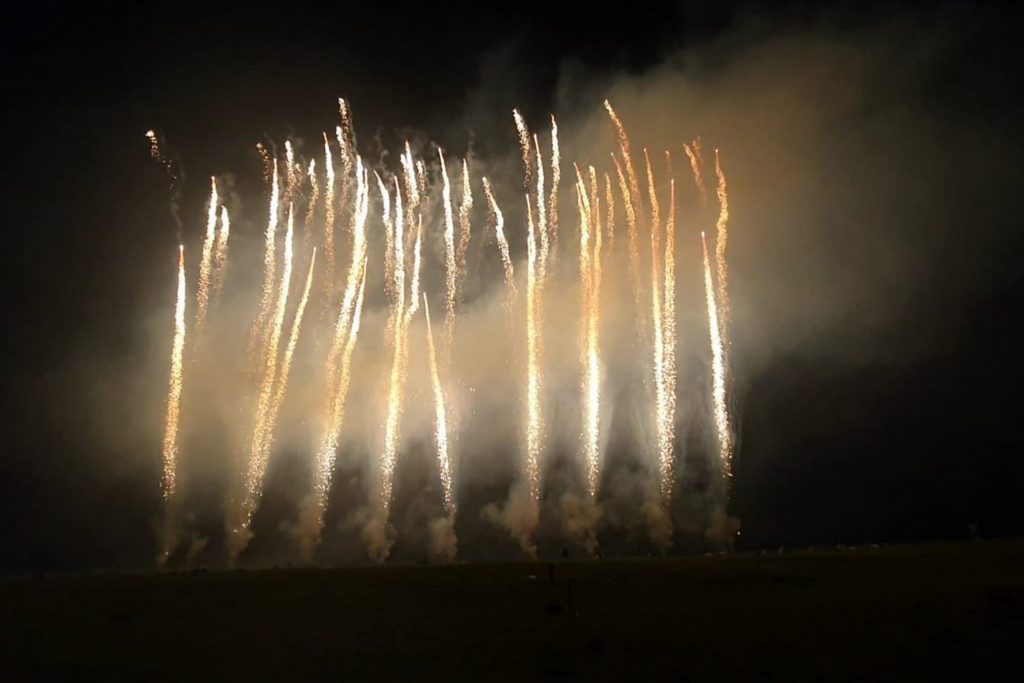 Most of the crew went down the night before and camped (in social bubbles) had a few beers and a good old BBQ, where we discussed tomorrows plans, with massive compliments going to the chef  (Mel)

Show / Prep day, the weather was beautiful and the mood was high so the rig was a breeze. Dave and Wayne on the shells. Tom, Nick and Stu on the cakes and slice positions, Scott and Mel on the frontages with Mark on wiring and FireOne. We were all done and tested by 2pm which made a pleasant change so the crew headed off and had some food / drinks at camp in readiness for show time.

Come show time nerves were high as we lined up to fire first before the other two teams, but a final check of site and a full comms test and we were good to go. Scott took a back seat come firing time and had the chance to watch (and critique) his display from the crowd side, while Mark and Tom took control of firing the show.

"All of the crew thoroughly enjoyed the whole weekend, which was topped off with some amazing fireworks"

The display fired and performed well as from a spectator’s point of view but from the designer’s point of view there were a few mistakes, such as a couple of cakes firing too fast and some slices that didn’t function as they should, but overall, Scott was happy with the design, especially the numbers (22) during the Pink song that were a huge hit with the crowd and the gold glitter crossette finale too!

The other two teams fired their displays and it was results time. We came in Second place with a surprised Optimum Fireworks in First place, huge congratulations were shared amongst the teams and a beer or two were shared (socially distanced of course) later that evening around the camp.

All of the crew thoroughly enjoyed the whole weekend, which was topped off with some amazing fireworks, laughter and of course a fair few drinks. For that moment, it was almost like it was a normal weekend, no COVID, no pandemic, no stress, just good camaraderie, beer, banter, friends and fireworks. Absolutely amazing. 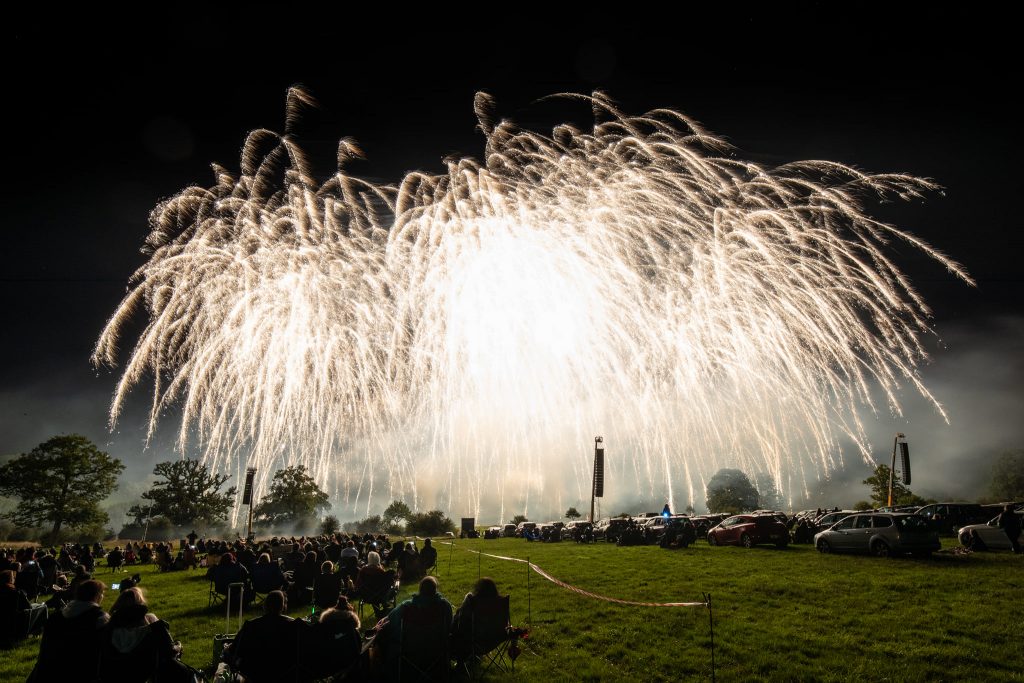 "Stay safe our fellow Pyros and here’s to better things!" 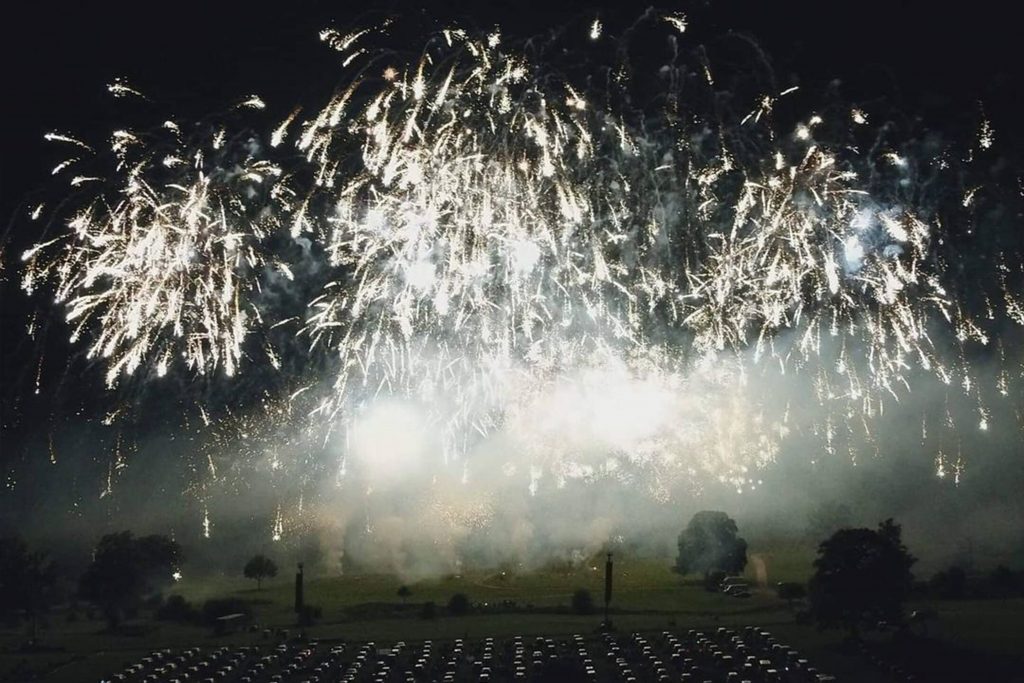 Well, its now February 2021 and things seem to be picking up at the moment with the new Roadmap out of the pandemic, vaccines seem to be working well and the R rate is going down, things are starting to look up and while 2020 was a washout for many, one thing that I will remember is the weekend spent with good friends and fireworks at Eastnor where we had an absolute ball.

2020 was an absolute car crash for our industry and the events that the MLE team managed to get up and running were the shining beacon for many in the pyro world, just to get a glimmer of normality back, even just for that one weekend, took the edge of the pandemic which was a welcome break that’s for sure.

I think we have still got a lot of hurdles to jump through as an industry in 2021 however I think the worst has been and gone and one things for certain, we at Pyrotex can’t wait to get back out there doing what we do best!

Stay safe our fellow Pyros and here’s to better things!