In April our guys travelled to Vietnam to compete in the Danang international firework festival (DIFF for short). Again, as with the Philippines, we were competing against 9 other teams from around the world. After 2 flights totalling nearly 16 hours the crew were absolutely shattered waiting for the baggage to appear and Mark suddenly pipped up, “Quick put your corporate tops on!” the crew did not really question as to why as they were all so tired, so they rummaged through their suitcases in the baggage claim hall and swiftly put them on. Once outside they were bombarded with camera crews from the get-go, the public at the airport thought they were celebrities. Once the crew arrived at the hotel, even more pictures and camera crews were there to welcome them, this was only the start.

"In April our guys travelled to Vietnam to compete in the Danang international firework festival competing against 9 other teams from around the world." 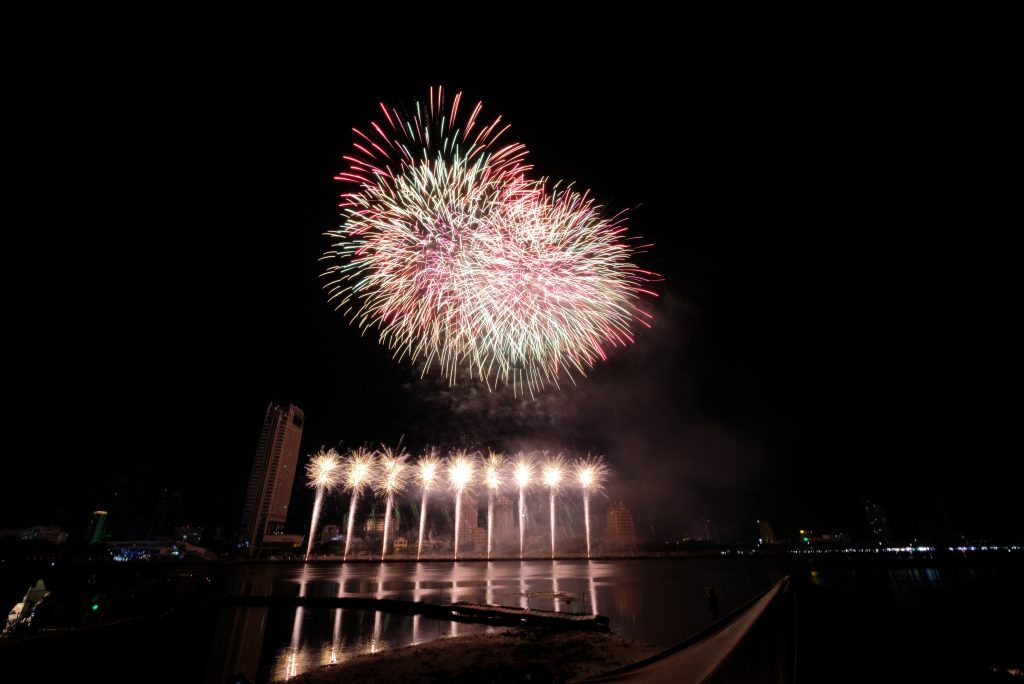 That evening they watched two other teams fire their shows then went for a meal with the organisers to discuss the weeks set up plan. Once on site the temperature in Danang was far from pleasant, and was likened to working inside an oven, especially when unloading the steel shipping containers. The crew spent long days on site working in the crazy heat (that the locals and labourers avoid between 11am and 1pm by having a so called “siesta”) before heading off into the nightlife that Danang had to offer. Once they had established that Bamboo 2 bar was the Local HQ they met there every evening to have a few beers, hijack the bars laptop to put songs on and discuss where they were going to eat, sometimes they didn’t end up going anywhere and resorted to a local lad who sold small chicken skewers from his pushbike.

"The crew ended up with 400-meter-long firing site stretching 11 single shot plates wide 3 deep with 9 cake and slice positions and 5 shell stations for the 20-minute show."

By the end of the week, after numerous pictures and interviews with the local tv companies the crew ended up with 400-meter-long firing site stretching 11 single shot plates wide 3 deep with 9 cake and slice positions and 5 shell stations for the 20-minute show. the atmosphere surrounding the competition was tense but an enjoyable experience for the crew that they all enjoyed deeply and working with Global 2000 was a pleasure for us all.

The atmosphere on the night was unbelievably exciting and everyone was raring to go, Unfortunately the weather had other ideas and it decided to rain through both shows and both teams got smoked out. The crew were a little disappointed due to the hard work that went into the show but a week later we were told that we came 1st in the heats and had been invited back to compete in the final, Chuffed was not the word!

So, after two weeks on UK soil we jetted off back to Danang to compete in the final along with Team Italy (Martarello) and Team Australia (Howard and Son’s) the difference this time round was all three teams had the same amount of product, the only differences were the effects and colours which made it very interesting, especially for Mark who had to script a 15-minute show in under two weeks using products he was not fully used to. 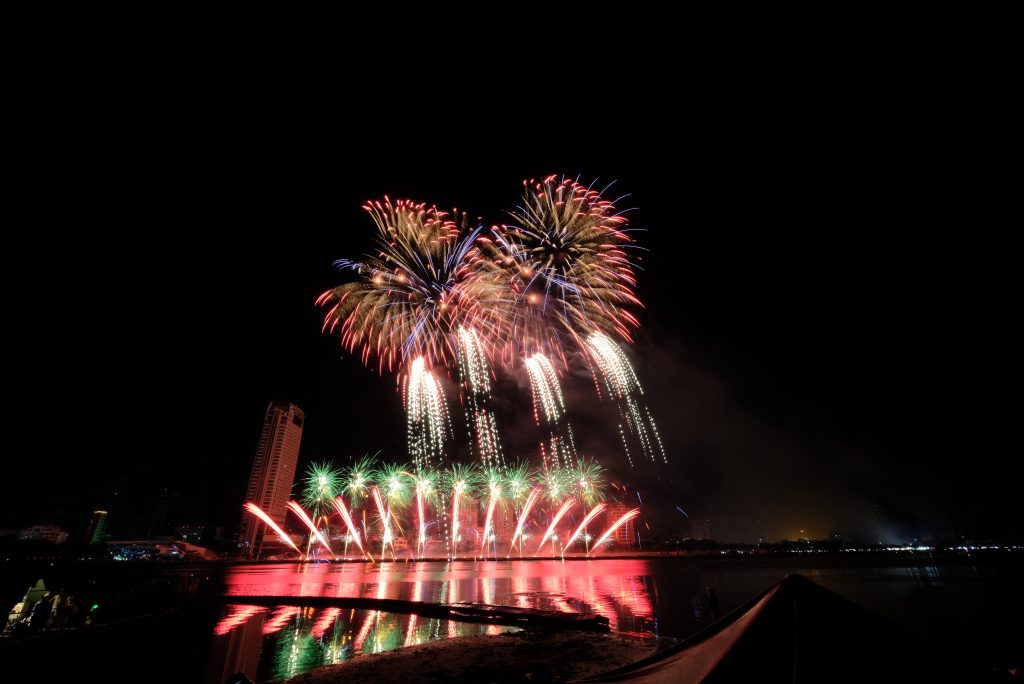 "We were overall very happy with how the show fired and the experiences we shared in such a beautiful country.       " 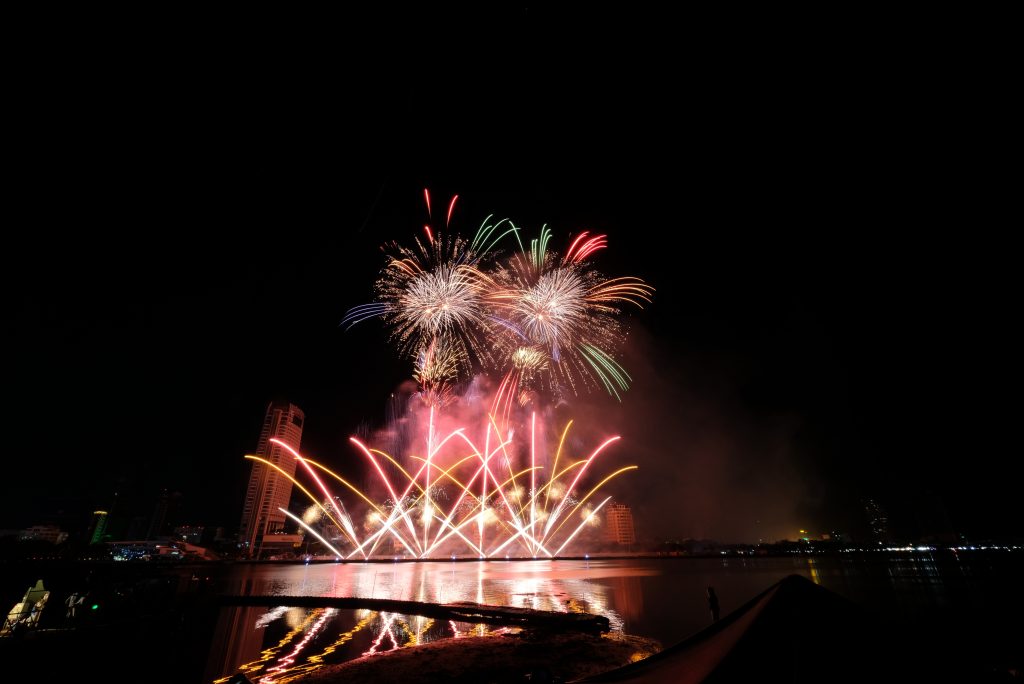 Another week on site with temperatures hitting the mid 40’s was not a pleasant experience, but the crew stuck with it and managed to pull it off again, even when Mark decided to raid the free stock container and started changing the script to put more product in the show only one and a half days before show day! Plenty of drinks in HQ afterwards kept the crew in check. One night three of the crew went wandering off and found a little noodle bar on the corner of some crossroads where the food was prepared on the street on what can only be described as a Bunsen burner on top of a gas cylinder. While this was cooking they were given some small plastic chairs no taller than 18 inches and a small round table, but the food was delicious. They then returned to the rest of the bunch once they’d bypassed The Hotel California.

All three team’s shows were a success and then came results time. When Mark and the other two team leaders were asked on stage we nervously awaited the results which seemed to take forever, unfortunately this time we came 3rd with Martarello clinching first prize. We were all disappointed with the result but overall very happy with how the show fired and the experiences we shared in such a beautiful country.