We headed off to Vietnam in June for our second time to compete in the prestigious competition DIFF2019 and like last time in Vietnam we were competing against 9 other teams from around the world.

After 2 flights totalling nearly 16 hours the crew were waiting for the baggage to appear at Danang and Mark suddenly pipped up, “make sure you are wearing your corporate tops!”, so the crew rummaged through their suitcases in the baggage claim hall and swiftly put them on.

Once outside the airport we were bombarded with Global 2000’s camera crews from the get-go, and the public at the airport thought we were celebrities!! After the pictures and greetings were over Global2000 then took us to our hotel which is directly behind the firing site.

Once at the hotel we had the obligatory pictures with the Global team in the lobby while we were being checked in, after a few hours catch up at the hotel, we were then whisked off by police escort to the other side of the Hann river to watch the two teams that were firing that night.

Afterwards, the crew all headed to the local HQ (Bamboo 2 bar) to discuss the weeks set up plan.

"Once outside the airport we were bombarded with Global 2000’s camera crews from the get-go, and the public at the airport thought we were celebrities!"

the crew ended up with a 400-meter-long firing site stretching 11 single-shot plates wide 3 deep with 9 cake and slice positions and 5 shell stations for the 20-minute show. 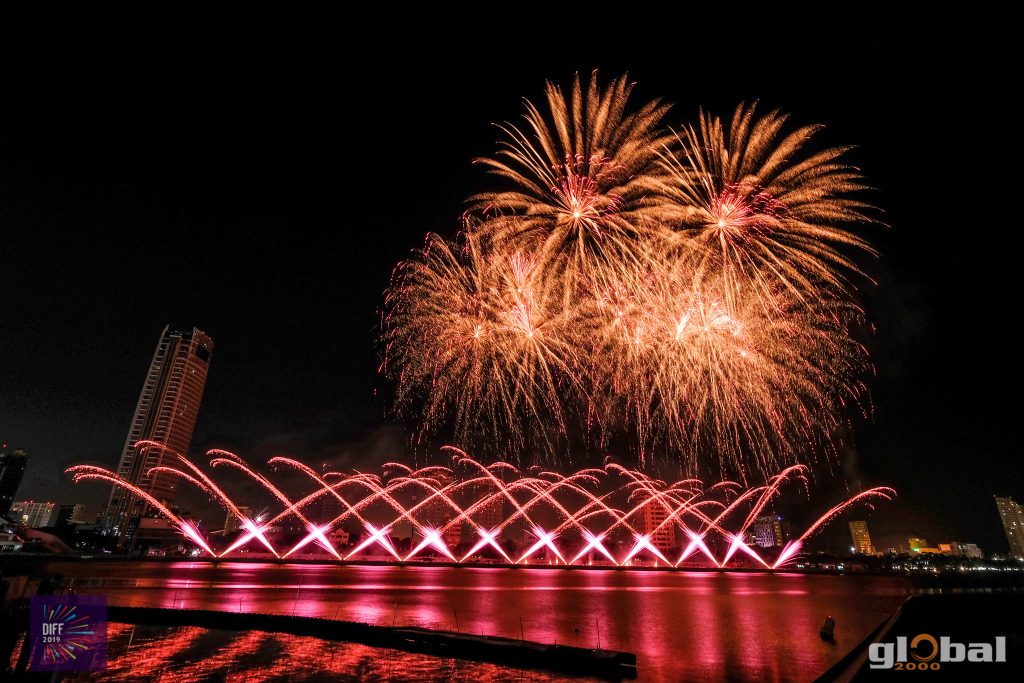 Once on site and rigging, the temperature in Danang was averaging around mid to late 30’s and the humidity was almost 90% so it was far from pleasant to work in. The crew spent a long 5 days on site working in the crazy heat, even working through the lunch to get the show down and ready for Saturday night. After the days rig, we were in the hotel for less than 1 hour before heading off to Bamboo 2 bar (HQ) to have a few beers, hijack the bars laptop to put songs on and discuss where they were going to eat, sometimes they did not end up going anywhere and resorted to ordering pizzas from the bar or a local lad who sold small chicken skewers from his pushbike.

By the end of the week, after numerous pictures and interviews with the local tv companies the crew ended up with 400-meter-long firing site stretching 11 single shot plates wide 3 deep with 9 cake and slice positions and 5 shell stations for the 20-minute show. The atmosphere surrounding the competition was tense but an enjoyable experience for the crew that they all enjoyed deeply and working with Global 2000 was a pleasure for us all.

"The atmosphere on the night was unbelievably exciting and everyone was raring to go, the show fired perfectly, and all our crew were left feeling proud."

The atmosphere on the night was unbelievably exciting and everyone was raring to go, the show fired perfectly, and all our crew were left feeling proud. As it turns out we were not the only ones who enjoyed the show as we were later invited back to compete in the final, Chuffed was not the word!

So, after one week of long hours sat in front of the PC Scripting, Mark and the crew were back on site for another week of long hours and temperatures hitting the mid 40’s again this was not a pleasant experience, but the crew were almost adjusted to it with being out there for a few weeks already, so they stuck with it and managed to pull it off again, even when Mark decided to raid the free stock container and swapping products with the other team only a few days before show day! Plenty of drinks in HQ afterwards kept the crew in check and by Friday evening we were ready to go. 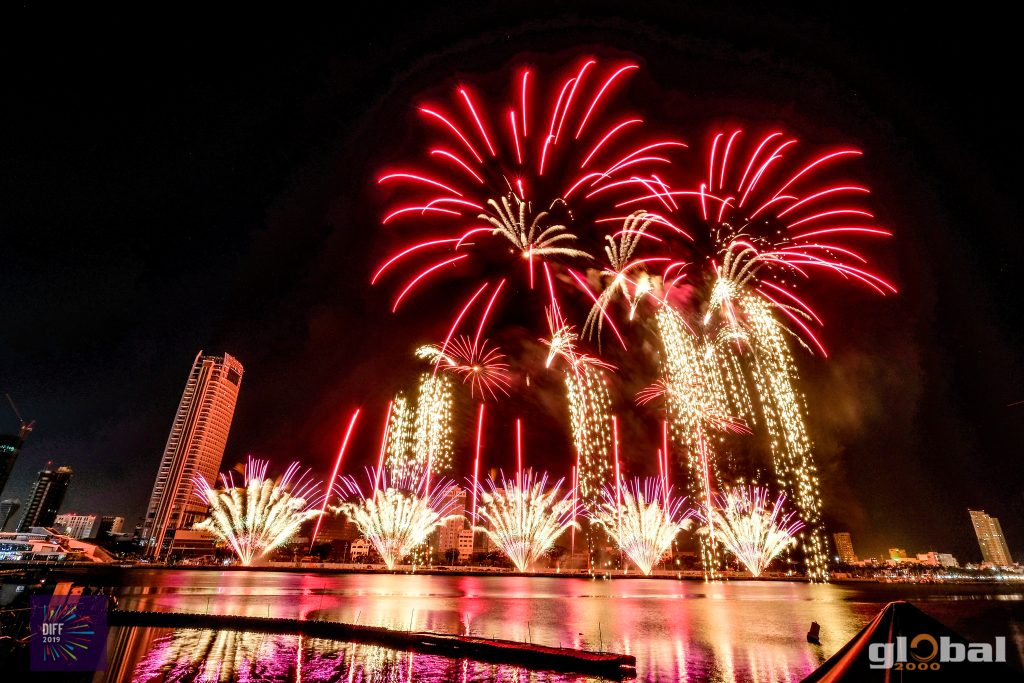 Both team’s shows were a success and then came results time..... 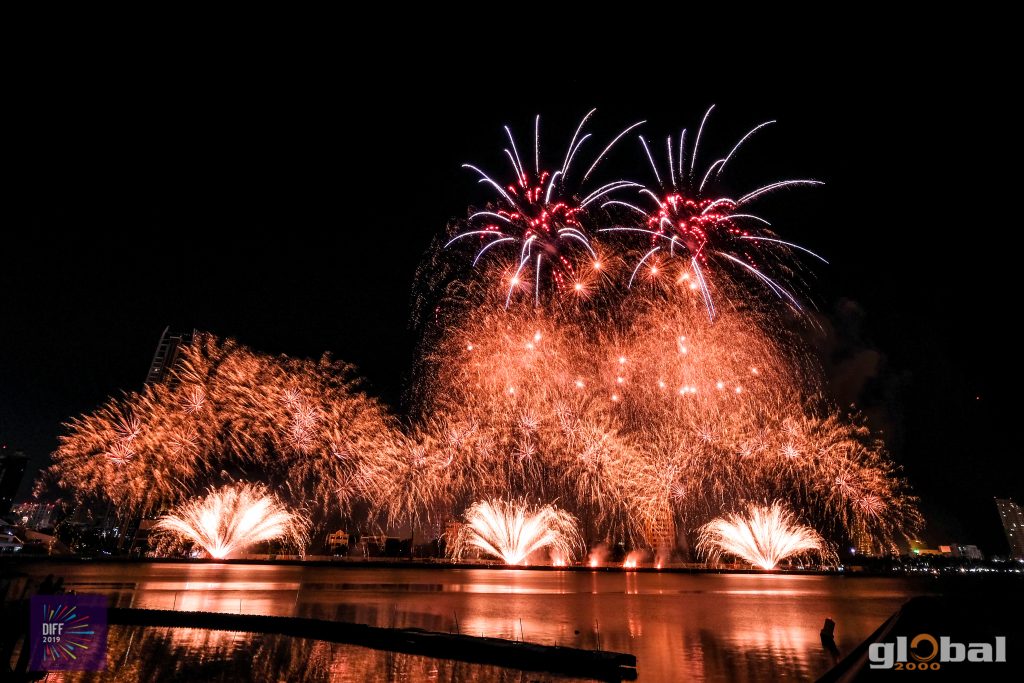 Both team’s shows were a success and then came results time. When Mark and the other team leader were asked on stage, we nervously awaited the results which seemed to take forever, unfortunately, this time we came 2nd with JoHo from Finland clinching first prize.

We were all disappointed with the result but overall, very happy with how the show fired and the experiences we shared in such a beautiful country.